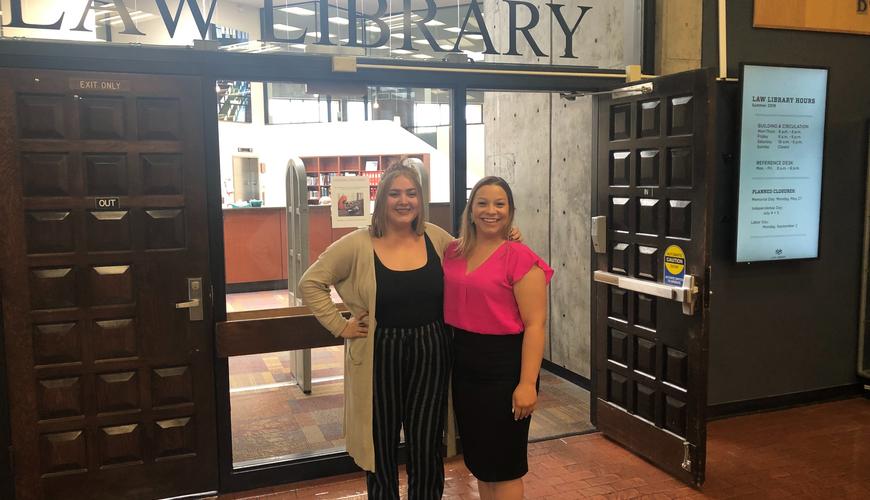 Pictured above are Hannah Goins (left) and Lydia Locklear (right) at the University of New Mexico (UNM) School of Law. Goins is a 2019 AIS graduate and is enrolled in the Pre-Law Summer Institute, an 8-week pre-law program at UNM for Native students. Locklear is a 2014 AIS graduate and was invited to speak to the current class about her judicial clerkship with Justice Earls at the NC Supreme Court. Locklear spoke on the Judicial Clerkship Panel and serves on the Judicial Clerkship Committee, which encourages and assists Native students in applying for clerkships.

Taylor Strickland is the daughter of Ronnie and Landa Strickland of the St. Anna Community in Pembroke and an enrolled member of the Lumbee Tribe of North Carolina. She graduated from The University of North Carolina at Pembroke (UNCP) in 2021 with a B.A. in American Indian Studies and a minor in Social Welfare. While at UNCP, Taylor was a member of the Native American Student Organization and served as a Student Service Leader for Social Justice with the Office for Community and Civic Engagement. She participated in the International Indigenous Exchange Consortium (IIEC) in 2018 and 2019 with study abroad to Canada and Australia led by AIS faculty.

Taylor will enter the M.A. Native American Studies program at the University of New Mexico in Fall 2022 with plans of a career in Diversity, Equity, and Inclusion. Taylor is excited to begin this new journey and is forever grateful to her alma mater and the AIS faculty and staff that mentored her throughout her undergraduate career.

Lydia Locklear is the daughter of Dr. Curt Jr. and Janice Locklear of the Union Chapel Community of Pembroke and graduated from The University of North Carolina at Pembroke (UNCP) in 2014 with a B.A. in American Indian Studies. She is a third-year student at Michigan State University College of Law pursuing a certificate in Indian law from the Indigenous Law and Policy Center. She serves as President of the Native American Law Students Association and Vice-President of the Christian Legal Society. Lydia’s time in law school at Michigan State has been filled with amazing opportunities that include working with local tribes in Michigan, as well as with tribes as far away as California. In 2016, she completed a directed study under the supervision of her professor, Matthew Fletcher, and worked with the Lumbee Tribe to research and write a memo on ways the Tribe could update and improve its enrollment ordinance. Lydia was excited and grateful to her professor and to her Tribe for the experience.

In summer 2016, Lydia was the Sidley Fellow for the Indian Law Resource Center in Washington, D.C. The Indian Law Resource Center is a nonprofit legal and advocacy organization that provides legal assistance to Indian and Alaska Native nations who are working to protect their lands, resources, human rights, environments, and cultural heritage. The Center helped draft the United Nations Declaration on the Rights of Indigenous Peoples, which was endorsed by the United States in 2010. The Center also provided legal support to indigenous leaders during the negotiation sessions for the American Declaration on the Rights of Indigenous Peoples. The American Declaration is a human rights instrument that promotes and protects the rights of indigenous peoples in North, Central, and South America and the Caribbean. The American Declaration was approved by the Organization of American States Working Group on May 19, 2016 after 19 years of negotiations on the text. Lydia attended the last round of negotiations between indigenous leaders and countries from the Americas. During the negotiations, she met delegates, ambassadors, and indigenous leaders from North, Central and South America, as well as indigenous peoples from the Caribbean.

Lydia is currently in Washington, D.C. completing an externship with the Department of Justice in the Office of Tribal Justice. The OTJ serves as the contact point within the DOJ for tribes and helps consult tribes and the public on the Department's policies. On her first day, Lydia observed oral arguments at the United States Supreme Court in Lewis v. Clarke, an Indian law case. Lydia says, “I am excited for the rest of my time here and am thankful for the opportunities that I have had. With the support of my family and my professors at UNCP, I was able to believe I could accomplish my dreams and now I am living them!”

Anthony Dwayne Bullard is an Education Assistant for the Office of Interpretive Services at the Smithsonian’s National Museum of the American Indian (NMAI) in Washington, D.C. As a member of the Lumbee Tribe of North Carolina, Bullard communicates the understanding of diverse Native cultures of the Western Hemisphere to visitors through educational interpretive programming. This includes; Family Programming; Hands-On-Activities; Interpretive Offerings; Storytelling and Tours. Bullard also serves as an Assistant to the Reservation’s Coordinator. https://www.youtube.com/watch?v=XWQGQJW7FVE&feature=youtu.be

Bullard completed an internship residency at the NMAI in 2009 and joined as a full time staff member in 2011. Bullard holds a Bachelor of Arts in American Indian Studies from the University of North Carolina at Pembroke (UNCP) and a Museum Studies Certification from the Institute of American Indian Art in Santa Fe, New Mexico. Bullard’s previous work includes internships at the UNCP- Native American Resource Center and the North Carolina Indian Economic Development Initiative. Bullard has a performance background in acrobatic-gymnastics, choreography, dance and tumbling.

Terry Locklear holds a B.A. in American Indian Studies from UNC Pembroke (‘03) and an M.S. in Instructional Technology from East Carolina University (‘06). He is currently pursuing a Doctoral Degree from UNC Wilmington in Higher Education Administration.

Locklear has worked in UNCP's Office of Distance Education since 2004 and has served his Alma Mater in various professional capacities as well. Most notably, he was UNCP's Staff Council Chair (2012-2014) and was part of the UNC Staff Assembly's Executive Committee (2013-2016). Locklear has also served on various university committees including the most recent Chancellor's Search Committee and the University Oversight Committee. Locklear considers his AIS degree among his proudest accomplishments. The program led him to discover a passion for Natives, which is why he remains at UNCP today. In his Doctoral program, Locklear is conducting research on how Universities can better serve Native students via Distance Education.

Sherry holds a B.A. in American Indian Studies (’04) and a B.A. in Sociology (’14) from UNC Pembroke. She earned a Master of Library Science from East Carolina University (’20).

Sherry has served UNC Pembroke for more than a decade in the Livermore Library. She began her UNCP career under service contract with the library and was permanently hired in 2006. Sherry served in the Livermore Library Government Documents department until she transitioned to Cataloging in 2013 where she currently serves as a University Library Technician.

If you earned a degree from UNC Pembroke in American Indian Studies, we would like to feature you on our Alumni page. Please submit a bio and photo to ais@uncp.edu.