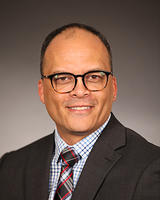 Dr. Lawrence T. Locklear (he/him) is the director of the Office of Student Inclusion and Diversity and adjunct associate professor in the Department of American Indian Studies, both at the University of North Carolina at Pembroke.

Dr. Locklear earned a Ph.D. in educational studies with a concentration in higher education and a minor in educational research methodology from the University of North Carolina at Greensboro. His dissertation examined the engagement of undergraduate Lumbee commuter students at a Native American-serving nontribal institution. Dr. Locklear also earned a Master of Public Administration and a Bachelor of Arts in American Indian studies, both from UNC Pembroke, and a Bachelor of Arts in history from North Carolina State University.

An enrolled citizen of the Lumbee Tribe of North Carolina, Dr. Locklear’s research interests include Lumbee and American Indian history and culture, American Indians in higher education, and the history of UNC Pembroke. In 2014, he co-authored Hail to UNCP! A 125-Year History of the University of North Carolina at Pembroke with Dr. Linda Oxendine, professor emeritus of American Indian studies at UNC Pembroke, and the late Dr. David Eliades, former professor of history at UNC Pembroke. His essay, “Down by the Ol’ Lumbee: An Investigation into the Origin and Use of the Word ‘Lumbee’ Prior to 1952”, was published in the 2010 issue of Native South journal. In 2007, Dr. Locklear appeared in The History Channel’s Aftershock: Beyond the Civil War, where he provided historical commentary about Lumbee hero Henry Berry Lowrie, his multiracial gang, and their fight for social and political justice in Robeson County (North Carolina) between 1864 and 1874.

Dr. Locklear has served in numerous leadership capacities at UNC Pembroke and in the American Indian community at the tribal and state levels. He is a brother in Phi Sigma Nu, the oldest and largest American Indian fraternity in the United States, where he currently serves on the Chief Council (national executive board) as the Chief President (national president). Dr. Locklear served previously on the Chief Council as the Chief Secretary and Chief Dean of Ma’enos, who is responsible for oversight of the fraternity's membership intake processes. From 2011 to 2013, he co-chaired UNC Pembroke’s 125th Anniversary Committee. Between 2007 and 2011, Dr. Locklear served as the vice-chair for American Indian Women of Proud Nations and as the Lumbee Tribe’s representative on the Board of Directors for United Tribes of North Carolina. From 2005 to 2008, he was an elected representative on the Lumbee Tribal Council, including serving two terms as speaker.

Dr. Locklear has also received numerous awards and honors for his scholarship and service. He was awarded the inaugural Outstanding Student Support Award in 2021 from UNC Pembroke's American Indian Heritage Center. Phi Sigma Nu recognized Dr. Locklear as the 2016 Nu Man of the Year for professional chapters. In 2014, Hail to UNCP! was awarded a Willie Parker Peace History Book Award by the North Carolina Society of Historians. Dr. Locklear was named a co-recipient of UNC Pembroke’s Chancellor’s Award of Excellence in 2013. One year earlier, he was awarded the D.T. Smithwick Newspaper and Magazine Article Award by the North Carolina Society of Historians for the article “‘Lumbee’ runs through history of local Indians, Robeson County.”