Article by Joshua Rapp Learn (published in The Wildlife Society)

“The fire does create this challenging habitat around them by altering the availability of resources,” said John Roe, an associate professor at the University of North Carolina at Pembroke and the lead author of a study published recently in the Journal of Zoology.

Prescribed fires help preserve longleaf pine ecosystems in the Southeast that species like red-cockaded woodpeckers (Picoides borealis) rely on. Birds and other quicker-moving species can escape the immediate danger of fires and then move back in once the heat dies down. But researchers thought the flames might have a larger impact on slow-moving turtles like box turtles (Terrapene carolina), which are declining in much of their range.

Roe and his co-authors looked at how prescribed fires would affect box turtle populations in two state parks: Weymouth Woods-Sandhills Nature Preserve and Lumber River State Park. The latter hadn’t received burn treatments while Weymouth Woods had. They observed population effects starting in 2012 until now, though the recent study analyzes the data from 2012 to 2017.

They found some individuals were indeed caught in the fire — annual mortality rates in the most heavily burned areas were above 50%.

“There are definitely mortality risks, and we’ve quantified that, and it’s significant,” Roe said. “But we haven’t seen any alteration of population growth rates.”

The team also looked at behavior and found that box turtles primarily used unburned fire refuges in the midst of burn patches.

The study area in Weymouth Woods has deep valleys partly sheltered from surrounding burns as well as areas that are too wet to burn. The researchers found the turtles stuck to these areas more often.

“I’ve seen them move into these areas and escaping an approaching fire,” Roe said, adding that he’s even seen turtles plunging into stream areas to avoid approaching flames.

But there were also some possible benefits of fire, they found. Female box turtles prefer to lay their eggs in open areas that receive more direct sun since it helps with incubation. Fires help create nesting habitats by opening up the tree canopy.

“They must be able to sense where these new openings are and respond to them if they have the opportunity,” Roe said.

In order to reduce some of the negative effects of prescribed burns, Roe said that fire managers might want to consider leaving unburned refuge areas. “If you burn all at once, there’s not much chance of a slow-moving ground turtle to find refuge,” he said.

Joshua Rapp Learn is a science writer at The Wildlife Society. Contact him at jlearn@wildlife.org with any questions or comments about his article. 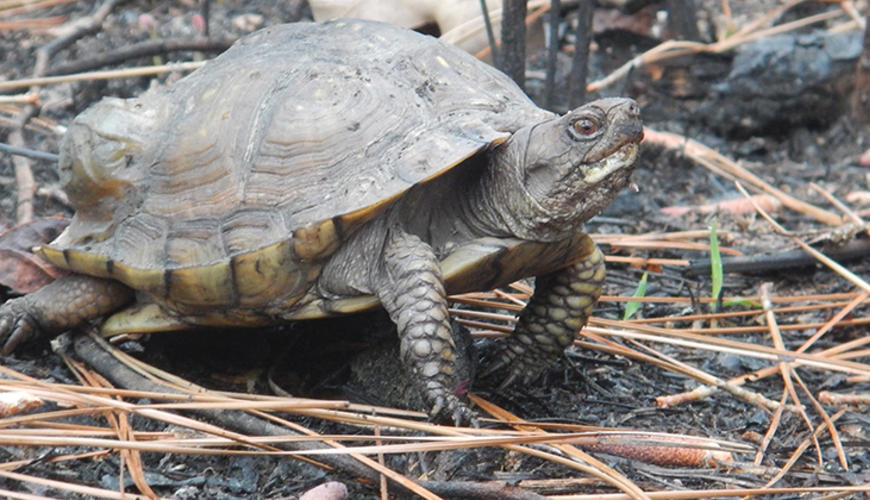