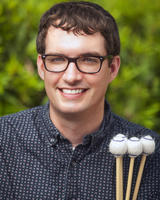 Joseph Van Hassel is a North Carolina-based percussionist specializing in orchestral and chamber music. Performance highlights include Carnegie Hall, the Cincinnati MusicNow Festival, the Percussive Arts Society International Convention, the International Tuba Euphonium Conference, and the Hindemith Center in Switzerland. A versatile artist in many genres, Joseph has performed or recorded with Percussion Group Cincinnati, Roland Vazquez, and Bernard Woma. He has worked with numerous composers in the performance of their music, including Steve Reich, Peter Garland, Joseph Schwantner, William Bolcom, Jennifer Higdon, Elliot Cole, and John Corigliano. Active in the performance of new repertoire, Joseph has individually commissioned and premiered works by many composers, and is especially noted for his close working relationships with Michael Barnhart, David Macbride, Stuart Saunders Smith, and Dan VanHassel. He can be heard on recordings for the Innova, Mode, Equilibrium, nobrow.sounds, and Ohio Percussion record labels, and his solo CD of percussion commissions is available on Soundset Recordings. He is published in Percussive Notes, and his compositions are published by Media Press and PerMus.

An active educator, Joseph has presented master classes and given solo performances at numerous universities throughout the USA, including the Manhattan School of Music, Peabody Conservatory, and the Center for New Music and Audio Technologies at the University of California at Berkeley. He is on the percussion faculty at the University of North Carolina at Pembroke, and previously taught at Ohio University and Blue Lake Fine Arts Camp. Joseph is a member of the Percussive Arts Society’s New Music / Research Committee, and co-owner of Media Press Music.