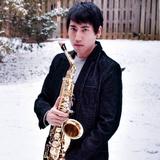 Taiki Azuma currently serves as a Part-Time Lecturer of Applied Woodwinds, teaching chamber music, woodwind methods, and applied woodwinds at Fayetteville State University. He is a Doctoral Candidate in saxophone performance and is dual-enrolled in Post Baccalaureate Certificate programs in Oboe Performance and Music Education at UNC-Greensboro, where he holds a graduate teaching assistantship.

He has commissioned, premiered, and performed a number of new works and transcriptions/arrangements for saxophone and woodwinds at various instrumental conferences and clinics as both a soloist and chamber musician as a member of the Ren Duo with Dr. Xin Gao (a saxophone duo that focuses on the performance of renewed and transcribed repertoire) and with the Sirocco Reed Quintet (2017 New Music Greensboro Artists-in-Residence and featured performers of ClarinetFest 2019). His arrangements and transcriptions have been featured most recently on the Chamber Music evening concert at the North American Saxophone Alliance Region 7 Conference in March 2019, as a Guest Artist at Truman State University in April 2019, Carolina Sax Fest in February 2018 and as a performer at both the 2018 North American Saxophone Alliance National Conference and International Saxophone Symposium.

As a multiple woodwind artist, Taiki is in demand as an instructor, clinician and performer across all woodwinds and can be heard in many of the area's musical theatre productions, having performed in 15 different shows in the 2018-2019 season. He has performed twice at the International Double Reed Symposium as a masterclass performer for Alex Klein, former principal oboist of the Chicago Symphony Orchestra, and Dr. Michelle Vigneau, Professor of Oboe at UT-Memphis. His research on the connection of body and sound has been presented at various venues including the 2019 Midwestern Conductor's Symposium in Kirksville, MO.

Taiki obtained his Bachelor’s degree from the University of Miami on a full music and academic scholarship double-majoring in music and pre-med and an MA in Instrumental Wind Conducting at Florida Atlantic University. His teachers include Dale Underwood (former principal saxophonist of the US Navy Band), Steven Stusek, Mary-Ashley Barret (oboe), Carla-Copeland Burns (flute), Michael Burns (bassoon), and Kyle Prescott (conducting). He has completed additional studies with world-renowned saxophonist, Nobuya Sugawa, as a student of the 25th Hamamatsu International Wind Academy in Japan.

Taiki currently serves as the Global Representative for BREATHTAKING Co., Ltd. Woodwind Accessories based out of Hiroshima, Japan. He is a member of the North American Saxophone Alliance, International Clarinet Association, National Flute Association, and International Double Reed Symposium as well as an alumnus of the Kappa Kappa Psi Honorary Band Fraternity.

Starting Fall of 2019, he will be the Part-time Lecturer of Saxophone and Music Appreciation at UNC-Pembroke as well as the Adjunct Professor of Oboe/Flute at Lenoir-Rhyne University.