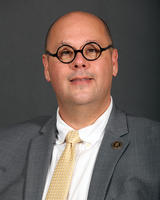 As the vice chancellor of Student Affairs at The University of North Carolina at Pembroke (UNCP), he is the chief student affairs officer and a member of the chancellor's cabinet.

Prior to UNCP, Howard's roles included serving as dean of students and later as associate vice president for student life and enrollment at East Tennessee State University (ETSU). He has also served in student affairs at Carson Newman University and as the chief housing officer and dean of students at The University of Virginia's College at Wise.

He is a prolific speaker and presenter and has been a panelist before the U.S. Senate Committee on Health, Education, Labor & Pensions (2019). Recent keynotes include the Tennessee Association for College and University Housing Officers (TACUHO) Annual Conference (2018), the Cocke County High School Centennial Celebration (2018) and National Hazing Prevention Week at Tennessee Wesleyan University (2018).

Howard is a member of National Association of Student Personnel Administrators (NASPA) and ACPA and is a graduate of the 2003 NASPA Region III/SACSA Mid Managers Institute at Duke University. Professional service includes off-site review committee work with the Southern Association of Colleges and Schools Commission on Colleges (SACSCOC).

Howard is a native of Newport, Tennessee, and a product of the public school system. He currently resides in Lumberton, North Carolina with his life partner of 25 years, their Doberman and their 20-year-old cat.