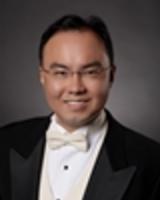 Jaeyoon Kim, a native of Seoul, Korea, earned his Doctor of Musical Arts in Vocal Performance at the University of South Carolina where he was the recipient of the Carroll Taussig Opera Fellowship. Dr. Kim holds two master’s degrees, one in Choral Conducting from USC and a second in Vocal performance from College Conservatory of Music in the University of Cincinnati. He also earned an Artist Diploma in Vocal Performance from the Cleveland Institute of Music where he apprenticed with the Lyric Opera Cleveland and was chosen to participate in the prestigious Cleveland Art Song Festival.

Dr. Kim has been praised for his lyric tenor repertoire. His operatic credits include the principal tenor roles in The Tales of Hoffmann, La Bohème, Gianni Schicchi, Cosi fan tutte, Don Pasquale, The Merry Widow, The Merry Wives of Windsor, The Magic Flute, The Consul, L'elisie d'amore, Amahl and the Night Visitors, Monsieur Choufleuri and many others in the United States, South Korea, Italy and Austria. As an active oratorio soloist, Dr. Kim has also performed in Messiah, Elijah, Creation, St. Paul, Beethoven's Ninth Symphony, Mozart’s Requiem, Coronation Mass, Rossini’s Stabat Mater, Verdi’s Requiem, Britten’s War Requiem and many others. He made his debut on the European stage by performing the role of Ferrando in Cosi fan tutte at the Opera Theatre of Lucca, Italy and later was invited to perform Beethoven’s Mass in C and Bizet’s Te Deum as a tenor soloist in the 2004 International Conducting Workshop in Varna, Bulgaria. He also appeared at the South Carolina Education TV for the production of Mozart’s Requiem, which he performed again with Augusta Symphony Orchestra, USC orchestra, and finally with USC Concert Choir at the Dürnstein Abbey, Austria in 2006. In the summer of 2011, he was invited to perform the tenor solo of Verdi's Requiem with Dohnanyi Orchestra at the northern cities in Italy, hosted by Varna International. As an equally comfortable singer of art songs, he has been presenting art song recitals with his wife and concert pianist, Dr. Seung-Ah Kim. In 2016, they released a CD, “Romantic Art Songs” featuring art songs by Donizetti, Bellini, Turina, Liszt, Duparc, Rachmaninoff and Tosti.

Dr. Kim's teachers include Walter Cuttino, George Vassos and Barbara Honn. He has been chosen to sing master classes for Warren Jones, Elly Ameling, Dalton Baldwin, Sherill Milnes, and Steven Blier. Currently he is an Associate Professor at the University of North Carolina at Pembroke where he coordinates vocal studies and directs the UNCP Pembroke Singers.  Dr. Kim is also the Music Director at Hay Street United Methodist Church in Fayetteville, NC.​