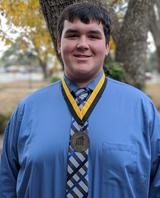 Ethan grew up in Robeson County and heard negative stereotypes about the college most of his life. However, despite being accepted into other universities, UNCP was his first choice. Ethan loved how close the university was to his family. He also appreciated the smaller population on campus. He saw this as an opportunity to connect with faculty and make meaningful relationships that would not be possible at larger universities. In attending UNCP, Ethan is grateful for the lower tuition costs, but overall the community on campus between the student body and faculty has made him glad he chose UNCP.

In December of 2019, Ethan graduated with a BA in history. Ethan received many scholarships during his collegiate experience, including The Greg and Gail Allen Scholarship in History, the North Carolina Tire Dealers Association Scholarship, and the American Tire Distributors Scholarship. Ethan was also recognized on the Chancellor’s List for six semesters and received the Gold Academic Achievement Award for three years. He was a member of the Alpha Chi Honor Society and Phi Alpha Theta History Honor Society, as well. Ethan completed three internships through a grant provided by the NC State Employees' Credit Union. He worked at the United Way of Robeson County, the Robeson County Church and Community Center, and the Lumberton Visitors Bureau.

Ethan is planning on attending law school after his graduation from UNCP. He is undecided on whether he will attend UNC Chapel Hill or Campbell University to obtain his Master of Laws degree. He plans to become a prosecuting attorney, with hopes to one day become a judge. Ethan encourages every honors student, and prospective honors students, to take advantage of the opportunities offered by the Honors College: “Don’t hesitate to attend functions that will bring you closer to your peers, because they could one day be a great help to you at UNCP.”