Lachu Adhikari and his family relocated six years ago to Charlotte from a refugee camp in Nepal.

For the first time in his life, he had a place to call home–a far cry from the cramped bamboo hut he shared with his parents and two younger siblings in a village with no electricity and limited access to running water.

Today, Adhikari, a 20-year-old sophomore at UNC Pembroke, has a new lease on life. But his heart remains with the Nepalese people, especially the children who lack adequate medical care. Adhikari chose UNCP to further his education with the goal of one day returning to his country as a pediatrician.

“As a refugee, you see people dying and suffering from different kinds of disease,” he said. “That’s when I decided, I want to be a doctor to help the children in my community who don’t receive the proper nutrients.”

Adhikari’s journey to UNCP has been nothing short of amazing. He was born at the Beldangi camp in Jhapa near the Indian border. The camp provided water two hours in the morning and two hours in the afternoon. Oil lamps lit the huts at night. Accidental fires are all too common. Camp volunteers provide education through the 10th grade. After enduring such harsh conditions for 20 years, Adhikari’s parents sought help from the United Nations High Commissioner for Refugees (UNHCR) to come to the United States.

At 14, Adhikari couldn’t speak any English when he arrived in Charlotte. With help from volunteers Noel and Karen Sweezy he began applying for colleges while attending Garinger High School.

The culture shock was just beginning to wear off, when he packed his belongings for a new culture in Pembroke.

“I chose UNCP because I didn’t want to be too far from my parents,” he said. “The professors here are great. I really enjoy the classes and the student-to-professor ratio. I like the one-on-one time with my professors.”

At UNCP, Adhikari is self-disciplined with regard to his studies, finding little time for leisure outside of the men’s club soccer team and serving as a Braves Ambassador with the Office of Undergraduate Admissions.

“Right now, I’m focused on getting my BSN degree, then I will begin researching medical schools. I want go back to Nepal at some point, open a clinic and offer free checkups. My people are still recovering from the earthquake in 2015. I can’t just sit back and watch my country suffer.” 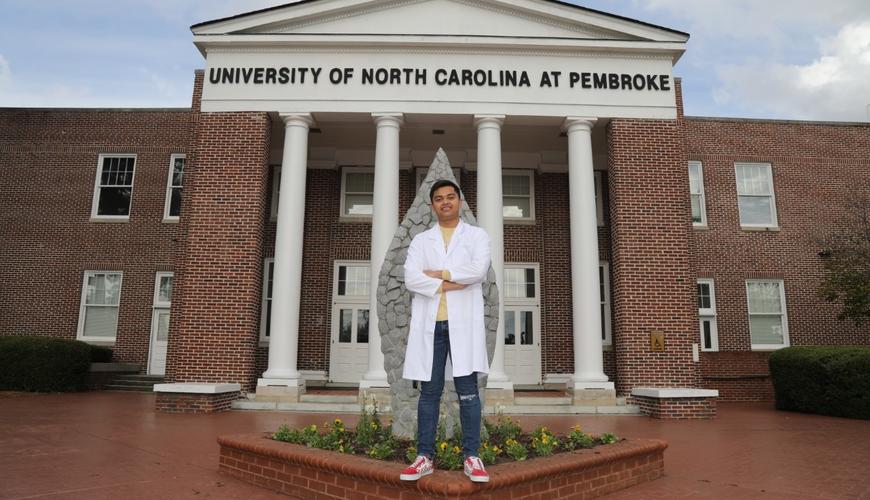