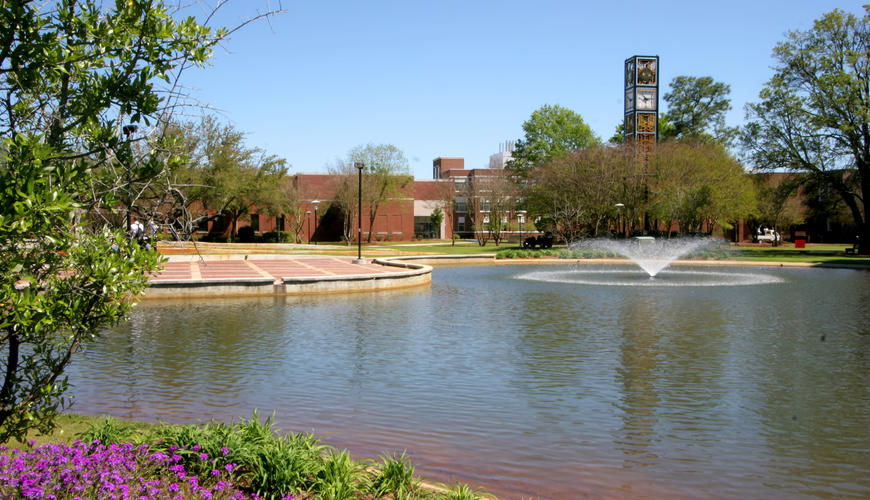 UNC Pembroke is a campus full of landmarks and points of interest that include the arrowhead, located in front of historic Old Main, the quad where students can be seen studying and the Lowry Bell Tower, which chimes the alma mater daily.

The Indian head on the front of this great stone arrowhead, has become a symbol of the spirit of the University. 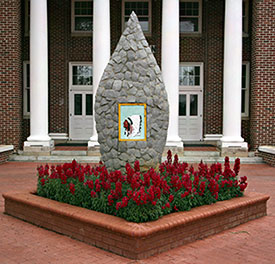 Known today as simply the Arrowhead, the stone and mortar monument was erected, most likely in April 1933, by J. (Joseph) Hampton Rich (1874-1949), a native of Davie County, North Carolina who served as director of the Boone Trail Highway and Memorial Association. Rich erected 358 monuments across the United States between 1913 and 1938 to bring public sentiment to bear on state legislators to improve the quality of roads. He would convince town leaders that what the town needed was a monument. Money would be raised, Rich would build the monument, and off he would go to the next town. Rich also raised monuments to other American heroes, including Davey Crockett, Abraham Lincoln, and Cherokee Chief Sequoia. Pembroke’s monument has a “Sequoia tablet” on the south face and a buffalo trail marker on the north face. According to Everett Gary Marshall, Rich’s biographer, “The Buffalo Trail marker is supposedly there to identify original buffalo traces that were then used by Native Americans and early colonists, that eventually became routes for modern highways.”

Marshall registered Pembroke’s monument as no. 136. He has registered 144 original sites, of which approximately 50 still survive with a monument and/or marker. A similar monument erected by Rich in April 1933 stood near downtown Lumberton on the grounds of the administrative offices for the former city schools. Although destroyed in an accident by a runaway car in 2006, a metal tablet from the monument was adhered to a marble stone, in a similar shape to Pembroke’s Arrowhead, and placed on the grounds of the county Courthouse in Lumberton.

Pembroke’s monument has been rebuilt since it was first constructed. Originally erected in the southeast corner of the Quad, the Arrowhead was moved in November 1985 directly in front of Old Main, after a suggestion by Greg Cummings ’74, where it rests today.

Bert's was named in honor of Bertine Oxendine Prine (1923 - 2000) who served as executive secretary to five chancellors from 1943 until her retirement in 1991. Prine’s 48 years of service is the longest in the institution’s history. In 1986, she was named a recipient of the Alumni Association’s Distinguished Service Award. Bert's is located in the James B. Chavis University Center, adjacent to the Hawk's Nest. Dedicated September 16, 1987, Bert's currently houses Chick-fil-A and is a popular student hangout. 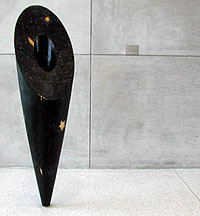 Located in the lobby of Lumbee Hall, the black terrazzo sculpture was commissioned by the North Carolina Artworks for State Buildings Program.

The sculpture, a six-and-a-half foot, vessel-shaped piece, symbolizes the Lumbee River and its indigenous plant life, says its artist Kenneth Matsumoto of San Jose, California, who refers to the river as the “Lumbee River.”

Bronze leaves embedded in the sculpture represent the lush vegetation seen throughout the Intercostal Plains of North Carolina.

Inside the opening at the top of the sculpture is water from the Lumber River.

“When I discovered the Lumbee River and its beautiful blackness, I thought about this water and the symbolism we (as people) attach to water,” he said.

He reflected on the parallel symbolism he felt applied in seeing his artwork as a container, and how in a metaphysical sense, many of us view our bodies as “vessel for our spiritual souls.” Matsumoto added that, to him, the water also symbolizes a sense of spiritualism and rebirth. 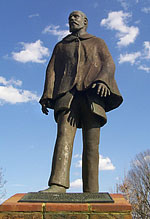 In 1885, Representative Hamilton McMillan (August 29, 1837 - February 27, 1916), of Robeson County, introduced legislation in the North Carolina General Assembly giving the Indians of Robeson County a legal identity and schools of their own. On March 7, 1887, the General Assembly enacted legislation, sponsored by McMillan, creating the Croatan Normal School (now The University of North Carolina at Pembroke).

Located in the Quad, the Heritage Oak was dedicated on March 7, 2013 as a lasting tribute to UNC Pembroke's 125th anniversary.

The tree was donated by Green Biz Nursery & Landscaping.

The stone marker, at the base of the tree, was donated by the 125th Anniversary Committee.

As the tones roll across the area and rise into the skies, let them remind us of this educational institution and of fine people like Ira Pate and Reba Lowry who contributed to the growth of Pembroke.

- Excerpt from the Bell Tower dedication in 1981 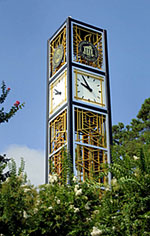 The Lowry Bell Tower, located next to Old Main, and in the middle of The Quad, has been a campus landmark since its dedication on May 10, 1981. UNCP’s alma mater, Hail to UNCP, along with other selections can be heard at noon and 6 p.m.

Born near Maryville, Tenn., Mrs. Lowry, who wrote the lyrics to Hail to UNCP in 1954, served the university for 40 years. She was an instructor in the Foreign Language Department, advisor to The Indianhead, first Dean of Women, director of the Pembroke Players and women’s basketball coach. She was also the first woman to join the Chancellor’s Club.

Mr. Lowry, from the Elrod community south of Pembroke, organized and served as chair of the Music Department from 1935-57. In 1954, he wrote the music to Hail to UNCP. From 1957-71, he taught music at Pembroke Senior High School.

The Lowry Bell Tower underwent a complete renovation during the summer of 2003.

Bell towers make such wonderful additions and produce such beautiful tones, Lowry said. Music has been such a part of my life. This tower will be beautiful to the ear as well as the eye. – Ira Pate Lowry 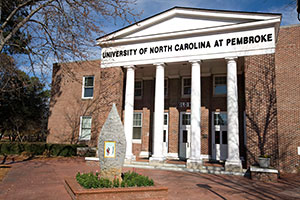 Old Main is the most recognizable symbol of UNCP. Constructed in 1923, gutted by fire in 1973 and restored in 1979, Old Main is the oldest brick building on campus. Listed on the National Register of Historic Places, Old Main originally housed administrative offices, classrooms and an auditorium.

Today, the first floor houses the Office for Diversity and Inclusion, the television station WNCP, and the Native American Resource Center. On the second floor are the departments of American Indian Studies, Geology and Geography and Mass Communication, the Teaching and Learning Center, The Pine Needle (student newspaper), and the Southeast American Indian Studies Program.

As one first enters Old Main, a sign on the wall tells the story of the origins of the name "Old Main." It reads:

"The term "Old Main" was first applied to the oldest brick building on this campus when the new administration team - President Dr. R.D. Wellons, Registrar James A. Jacobs, the secretarial staff and I moved to the new offices in Sampson Hall in 1949. I then suggested that we call the building from which we had moved "Old Main." The term stuck! The term was not original with me. I got the name from an old administration building on the McKendree College campus where I received my college degree. In May of 1978, I went to the 150th anniversary of McKendree College and the 50th anniversary of my class of 1928. In visiting the college campus I paused a few moments at the threshold of the old administration building. There carved in stone was the name "Old Main" built in 1850. In 1928, I brought the memory back and in 1949 at my suggestion, it was applied to our first brick building on campus....

Excerpt from a speech given at the dedication ceremony
February 16, 1980 by
Clifton Oxendine '24, Professor Emeritus
Pembroke State University"

The Quad is the area between Old Main and Livermore Library. The Quad is the oldest part of campus. Students can be seen studying or playing a game of frisbee.

The red-tailed hawk symbolizes the courage, speed, power and vision for athletes and all students to aspire to. 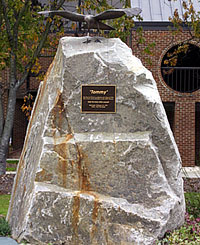 The Tommy Statue was in place for just four days when its legend took hold at UNCP. Senior Braves basketball player Chavis Rachel was photographed by a passing Fayetteville Observer photographer climbing the rock to touch the hawk for good luck before the Homecoming game on February 13, 1999. With the Braves down by two points, Rachel made a desperation three-point attempt that – perhaps guided by an unseen hand -- found nothing but net to win the game. Rachel's visit with the hawk was not revealed until the following Thursday when the photograph was published by the newspaper.

The life-size bronze statue of the University's mascot, a gift from the Class of 1999, is located in front of the James B. Chavis University Center.

The bronze statue is 22-inches tall with a 57-inch wingspan and weighs 150 pounds. It sits on a pedestal of raw granite, weighing close to 16 tons and stands over nine feet tall.

Art Department Professor Paul Van Zandt completed the project in 16 weeks. It was crafted after close observations of a red-tailed hawk, which is indigenous to Robeson County.

Rub the rock for good luck! 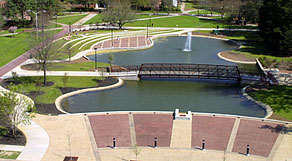 Located next to the Lowry Bell Tower and between the Livermore Library and the D.F. Lowry Building, the water feature and amphitheatre were dedicated on February 16, 2002. It has quickly become a focal point of student interest and activity.

The water feature and amphitheatre features one acre of water, an amphitheatre, fountain and bridge.