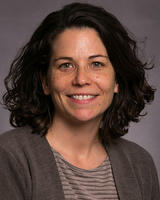 Nancy Palm received her PhD in Art History and American Studies from Indiana University in 2011. Her dissertation, “Racial Politics, the National Landscape, and Thomas Cole’s Indian Subjects,” explores the landscape paintings of Hudson River School founder, Thomas Cole, and illuminates the artist’s fascination with Native American subjects and the role his artwork played in perpetuating stereotyped understandings of Native Americans in the nineteenth century. Dr. Palm’s current research explores Cole’s engagement with Native Americans during his travels to Niagara Falls and the Indian subjects of iconic American painter, Winslow Homer, for how they reflect pervasive techniques of visual othering.

Dr. Palm has received multiple grants and fellowships and has given numerous presentations at conferences and symposia on topics as diverse as American landscape painting, nationalism and art of the American West, and transnational music traditions in African American painting. Her recent research on the development of the Indian Arts and Crafts Board was part of a panel discussion entitled “Power in Native Art: American Indian Artistic and Aesthetic Sovereignty,” which explored the relationship between American Indian art, its makers, and the cultural, political, and aesthetic contexts in which they engage with sovereignty. Dr. Palm has also given presentations on UNCP’s campus on Art Deco and Andy Warhol.

At UNCP, Dr. Puchner teaches a range of art history courses, both face-to-face and online. Her courses include contemporary art, art of the United States, twentieth-century art, and Native American art. She teaches Survey of Art: Renaissance to Modern in the Maynor Honors College, and she teaches both writing enriched and writing-in-the-discipline courses in the Art Department. Puchner maintains a global focus in all of her curriculum and exposes students to a range of theoretical perspectives and critical approaches to the study of art and its histories. She also extends her teaching beyond the classroom to include visits to local and regional art museums, like the A.D. Gallery, the Museum of the Southeastern American Indian, and the North Carolina Museum of Art in Raleigh. Dr. Puchner has received multiple grants and fellowships, including a 2018 UNCP Faculty Research and Development Grant to support her current research. She has also given numerous presentations at conferences and symposia on topics as diverse as American landscape painting, feminist voices in the visual arts, contemporary Indigenous art, Art Deco, and Andy Warhol’s screen prints.

Dr. Puchner received her PhD in Art History and American Studies in 2011 from Indiana University, where she wrote a dissertation on American landscape painting and representations of Native Americans. She is currently completing two research projects on the Indigenous subjects of nineteenth-century American painters. The first explores the work of nineteenth-century American landscape painter and Hudson River School founder, Thomas Cole. While Puchner’s previous research explores Cole’s development of stereotyped Indians in his oil on canvas paintings, this current work alternatively focuses on his engagement with “real” Native Americans, evidence of which appears in his private journals and sketchbooks. Her second project explores representations of Native Americans in the oeuvre of American artist, Winslow Homer, works that have received limited critical attention. Puchner focuses on the ways in which Homer confronted Indigenous identity, modernity, and transculturation in his art and filtered his representations through his own experience as a modern American.

Recently, Dr. Puchner began to study and write about contemporary Lumbee art. Her recent essay entitled “The Community of Contemporary Lumbee Art” appeared in the Autumn 2017 edition of First American Art Magazine. This essay explores how the diverse yet interconnected artworks of Jessica Clark, Ashley Minner, and Hatty Ruth Miller evoke the resilience of Lumbee cultural character and create fresh perspectives on what it means to be Native American in a postmodern era. Puchner is continually pursuing research and scholarship on contemporary Lumbee artists, and in the fall of 2018, her work will serve as the foundation for an exhibition on Lumbee art at the Greenville Museum of Art in Greenville, North Carolina.