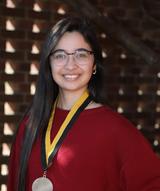 Melissa Ivette Mojica Cruz grew up as a military child, never really staying in one place long enough to claim it as her “hometown.” Around 2010, when Melissa was in seventh grade, her family moved and settled in North Carolina. When Melissa began to apply to colleges, UNC Chapel Hill was her first choice. After getting deferred and waitlisted at UNC, she received a letter from UNC Pembroke, which informed her that the staff on campus would love to admit her into the college. Melissa made the bittersweet decision to attend UNCP to get her undergraduate degree. Although UNCP was not her first choice, she quickly grew fond of the college, loving that the campus was small enough that her peers became like family.

Melissa graduated with a bachelor’s degree in social work with a minor in Spanish. During her time at UNCP, Melissa has been involved in numerous organizations on campus. She joined UNCP’s Eta Sigma chapter of Zeta Tau Alpha Women’s Fraternity the spring semester of her freshman year. She became the risk reduction and education chairperson of the chapter in April of 2017. Melissa still holds the position and is the current chapter president until she graduates. She was also a charter member of UNCP’s Order of Omega Greek Honor Society. She participated in a vocal harmony acapella group on campus for two years. She has also held multiple jobs around campus, working in the library for roughly two years, as well as mentoring students in the BraveStart program. During the fall semester of her senior year, Melissa began an internship with Cumberland County Schools, shadowing the school social worker at Lewis Chapel Middle School. Their work mainly focuses on section 504 plans, the McKinney Vento students, and student attendance. School social work, however, is not the end goal for Melissa.

After graduating, Melissa plans to get substance abuse certified. She is expecting to work in a substance abuse clinic until May of 2020. In the summer, her plans are to start her graduate studies, but she is undecided as to where--either Fayetteville State University or UNCP. She plans to study for her MA in social work, taking an advanced track and planning to graduate in the spring of 2021. After obtaining her MA, Melissa plans on becoming a licensed clinical social worker and finding her dream job working with the Department of Defense.

Melissa said that her experience in the honors college was much different than she expected. The curriculum was more enjoyable, and the classes were difficult but entertaining. She remembers taking Humanistic Traditions I with Dr. Teagan Decker. Melissa said writing an essay on ‘Beauty and the Beast’ will always stand out in her memories of the honors college. Some of her favorite aspects of the honors community were the unified work ethics of her peers, and the acknowledgment of work by her professors. She was also grateful for the opportunities provided by her senior research requirement.

For her senior project, Melissa chose to research historical trauma faced by minority populations. Her focus on the topic mainly discusses health and culture impacts, and the recommendations for future research for these traumas. Melissa was inspired to research this topic after visiting family in Puerto Rico during one of her Christmas breaks. She was appalled at the names of many tourist attractions in cultures and communities whose previous generations suffered tragedy and trauma due to colonization. Specifically, she was disheartened by the biggest mall in the Caribbean being named after Christopher Columbus.

When asked about advice for future honors college students, Melissa wanted to encourage them to remember to work at their own pace, and not compare their collegiate journey to their peers. “Remember you cannot compare your chapter one to someone else’s chapter twenty