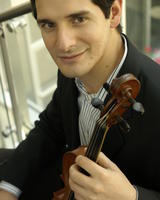 A versatile musician, Dr. Scalamogna often premieres and records solo and ensemble works written by living composers and performs in early music ensembles such as New Trinity Baroque. His orchestral experience includes engagements with the Grant Park Orchestra, the Alabama Symphony, the Charleston Symphony, and the Orchestra of the Americas. As a chamber musician, Dr. Scalamogna was a member of the Hodgson String Quartet at the University of Georgia, and the cofounder of the Cassat Horn Trio, dedicated to performing and premiering works for this ensemble.

Dr. Scalamogna is currently the associate principal second violin of the Augusta Symphony Orchestra, and a member of the Winston-Salem Symphony, the Greensboro Symphony Orchestra, the Carolina Philharmonic, and the Savannah Philharmonic. In addition to teaching at UNCP, Dr. Scalamogna often gives masterclasses at colleges and universities and serves as faculty at music festivals and workshops both in the United States and abroad.

Beginning his music studies in Argentina, Dr. Scalamogna was a violin student of Fernando Hasaj, late concertmaster of Camerata Bariloche. He continued his education in Croatia at the “Ino Mirkovic” Music Academy. Dr. Scalamogna holds a bachelor’s degree from the University of North Texas and master’s and doctoral degrees from the University of Georgia. His major professors include Julia Bushkova and Levon Ambartsumian.