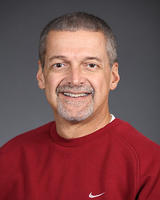 Dr. David B. Oxendine is a Lumbee Indian and a native of Pembroke, N.C. He received his Bachelor of Arts degree in Theater from Catawba College, a Master’s degree in Counselor Education and a Doctorate in Psychology both from North Carolina State University. Currently, he is an Associate Professor in the School of Education at the University of North Carolina at Pembroke.

Dr. Oxendine, during the summer months, was the Artistic Director of the outdoor drama Strike at the Wind! becoming the first American Indian to direct the show. Dr. Oxendine was the Artistic Director for SATW! for 15 seasons. In 1985, public television’s American Playhouse in New York contacted Dr. Oxendine for the television series ROANOAK, and he cast forty local Lumbee tribal members as extras and in featured roles. Afterward, he joined the Screen Actors Guild and moved to New York to study at the American Academy of Dramatic Arts (AADA).

Upon graduation from AADA, David appeared in films and television shows such as Big, Shakedown, Crossing Delancy, Arthur II, Working Girl, Slaves of New York, The Equalizer, Kojak, and New York Stories among others.

Dr. Oxendine has completed a screenplay based on the book by William McKee Evans entitled To Die Game, which currently is under consideration for production by several producers. One of Dr. Oxendine’s many hobbies includes photography, which allows another form of creative expression. The Smithsonian Institution in Washington, D.C. has published several of his photos of Lumbee life included in the Smithsonian’s Handbook of North American Indians. Recently, he was contacted by Harcourt Books, of Time-Life Books, to publish several photos for an entire article on the Lumbee Indians.

On the academic side, Dr. Oxendine’s research interest in is prejudice, discrimination and stereotyping and how these constructs intersect and interact throughout our society whether in the classroom, business world or in personal lives. He has presented this research and lecture in state-wide and international conferences over the past several years. Additionally, Dr. Oxendine was selected to be a member of the UNC Tomorrow Commission as one of 14 Scholar Council members representing the UNC System for the 2007-2008 academic year. Dr. Oxendine is currently a senator of the UNCP Faculty Senate, a member of the UNCP Student Conduct Broad along with membership of several other committees on campus. While currently working on manuscripts, with several submitted for publication, an article he co-wrote with colleague Dr. Rupert W. Nacoste from North Carolina State University entitled, “Who would claim to that, who was not? Evaluations of an ethnic validation procedure” was published in the July 2007 edition of the Journal of Applied Social Psychology.

Dr. Oxendine published a book entitled “Perceived Fairness of an Ethnic Validation Procedure: Implications for Lumbee Federal Recognition” by VDM, an international publisher from Germany. Dr. Oxendine recently published two research articles in the Journal of Social Science Studies entitled, “The Relationship between Political Orientation and Race on Modern Racism,” and “Gender, Race, and College Major: Do They Predict Modern Racism.” Dr. Oxendine’s most recent articles are published in Issues in Social Science are entitled “College Major and Modern