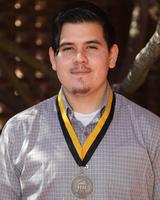 Prior to his high school graduation from Hoke County High School, Christian Tilley began looking into colleges he would like to attend to further his education. With his eyes set on The University of North Carolina at Charlotte, Christian began applying for scholarships that would offer him a full ride to the university. After receiving acceptance into the college, but unfortunately not receiving the scholarship, Christian made the decision to attend the University of North Carolina at Pembroke completely debt free. Although attending UNCP was not originally in the plans for Christian, he believes it to be a part of a divine plan, and he is ecstatic that he made this decision. During his time at UNCP, Christian has enjoyed meeting peers and professors who genuinely care about him and his academics, which he doesn’t believe he would have had the opportunity to do had he chosen another university.

In December of 2019, Christian graduated with a bachelor’s degree in mathematics education with a secondary concentration (9-12). During his undergraduate years Christian received multiple scholarships including the Mitchell Tyler Endowed Scholarship, as well as the Undergraduate Mathematics Award. To complete the requirements for his degree, he had to complete a teaching internship, which he chose to do at Sandy Hoke Early college. Christian taught three separate Math III classes, as well as planned and created the lesson materials for the classes.

Being a member of the Esther G Maynor Honors college proved to be rewarding each semester for Christian. Being able to have peers who understood his work ethic and encouraged and helped when he needed it was extremely useful. Christian even made genuine connections with professors in the honors faculty. These connections he built helped him during his final semester, when he chose to complete his senior project, which is normally spanned between two semesters, in one.

Christian completed his senior project on educational technology. Connecting his major to his own personal love for technology, Christian researched how technologies are being implemented in classrooms across the world. He plans to use the knowledge gained from his research about the benefits and pitfalls of technology in his own classroom in the future.

He plans to begin working at Scotland High School teaching mathematics. After getting a few years teaching under his belt, Christian plans to pursue his National Board Certification, and eventually obtain his master’s degree in mathematics education. Becoming a professor at a community college or a university may even be in the books for Christian much later down the road

When asked about his advice to future honors students, Christian encouraged relationships. Building relationships with the professors and students in the honors community will be rewarding throughout your entire collegiate career at UNCP. Christian also reminds the students that it is never too early to begin thinking about the senior project.