UNC Pembroke honored its graduating active duty and military veterans on May 2.

Thirty-six veterans earned their degree during the spring 2018 Commencement. Earlier in the week, Chancellor Robin Gary Cummings presented each graduate with a red, white and blue honor cord and a challenge coin during a special ceremony near the campus water feature.

“Service is one of our core values here at UNC Pembroke,” Cummings said. “Your record of service is unmatched compared to the rest of the members of BraveNation.

“You now have a foundation to build on the rest of your life. Thank you for your service to our nation and your commitment to this community and to others.”

UNCP is home to more than 1,000 military-affiliated students, which makes up 16 percent of the student body.

UNCP is a leader for military outreach. It is consistently recognized by various military publications as a top school for military service members, veterans and their families. Earlier this year, the university’s ROTC program was awarded the prestigious MacArthur Award for the second year in a row.

It was one of eight schools selected from among the 275 senior Army ROTC units nationwide.

Seth Larson of Lumberton was one of six ROTC cadets commissioned as a second lieutenant in the U.S. Army. He will be attending a three-month Quartermaster Basic Officer Leadership Course in June.

"I chose to go active duty,” he said. “I am looking forward to the opportunity to travel and to make a career out of this.”

Larson earned a criminal justice degree with a minor in terrorism studies. He said he enjoyed the “community feel” at UNCP and the personal interactions with his professors.

“ROTC has been the pinnacle of my experience at UNCP. I have loved it.”

Michael Gabol, who received a degree in information technology, is headed to the Research Triangle Park to put his skills to work. He served four years with the Army National Guard.

Gabol said he will never forget his experience in the days following Hurricane Matthew.

“I was part of the unit assigned to this area,” the Fayetteville native said. “We handed out relief supplies and rescued residents from flooded homes in Lumberton. We also distributed supplies at the shelters.

“That made me very proud.”

Jessica Canady enrolled at UNCP after serving in the U.S. Navy, earning the rank of Petty Officer Second Class. The Lumberton native served in the Navy from 2002 to 2007.

Canady earned a degree in nursing and plans to apply to graduate school in the fall. She currently works as a hospice nurse, but aspires to be a family nurse practitioner specializing in veterans care.

“I always wanted to help people,” she said. “Near the end of my service, my grandmother had congestive heart failure. Caring for her sparked my interest in the health care field so I decided to become a nurse.

“I knew a lot of my professors from the ADN program at RCC so it felt like a continuation of my degree. I really liked the environment here. I loved the accessibility of the professors which made it more comfortable being an adult learner.” 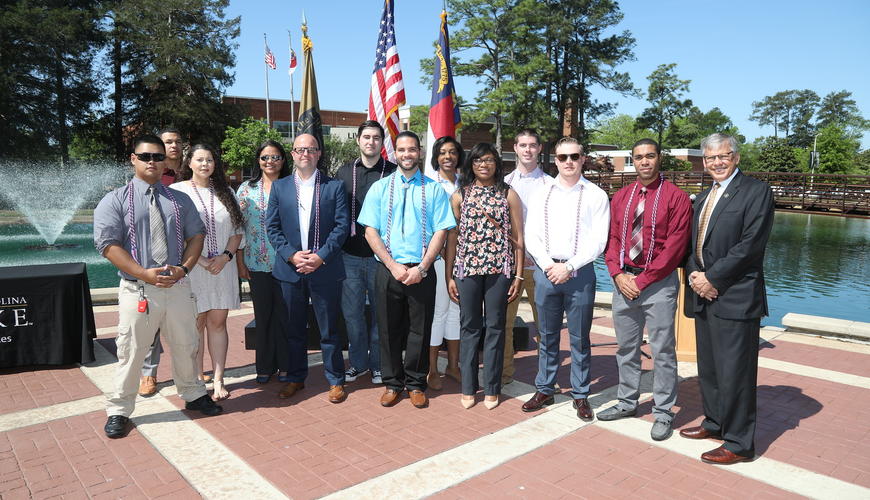