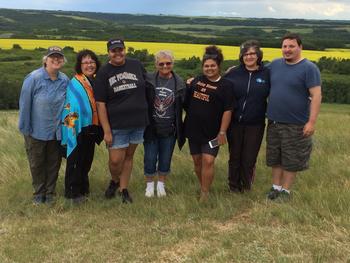 The course focused on remembering resistance and looked at Indigenous historical consciousness and the impact of colonization on memory. Students learned about Indigenous people in Saskatchewan and had the opportunity to visit Poundmaker Cree Nation and Gabriel’s Crossing. The course was held June 30 through July 11.

Nicholette Locklear said she enjoyed the beautiful skies, the wide horizons and the greenery that Saskatoon and Saskatchewan have to offer. Even though the students enrolled in the class were from three different countries, she observed that they had some similar experiences as Indigenous people and that their ancestors faced similar struggles.

“What stood out for me was actually standing on treaty territory that the Indigenous people fought for, and also standing in Treaty 6 territory where their actual chief is buried on their homeland—which didn’t happen much,” she said.

Locklear said she would encourage other students to take the course in the future, as it provides a “broader scope of perspective.”

“It creates a different lens,” she said.

Jacobs described the inaugural class as “excellent.” The course brought history to life for the students, with Jacobs noting they learned about the oral traditions of the Cree people, saw sacred sites, learned about Métis stories and had the opportunity to camp on Maria Campbell’s land.

“So being on the land, being out in community and hearing how that history is woven into the culture, I think is very powerful for our students to experience,” she added. 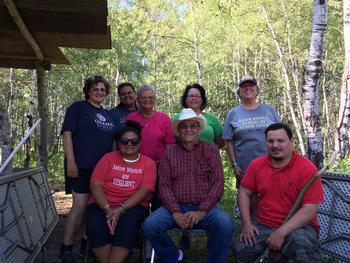 The International Indigenous Exchange Consortium program originated five years ago during a discussion with Jacobs, Haladay and Drs. Robert Innes and Winona Wheeler, faculty in the Indigenous Studies Department at the University of Saskatchewan. Over time, two other institutions -- Swinburne University in Melbourne, Australia and the University of Hawaii, Manoa -- became part of the program.

The exchange courses will continue on a rotation over four years. In 2019, Swinburne University will serve as the host site. In the summer of 2020, UNCP will host students from Australia, Canada and Hawaii. The University of Hawaii will host in summer 2021.

“Our experience in Saskatchewan was educationally enriching and emotionally moving,” Haladay said.

“Through a combination of academic seminars and six days of camping and cultural activities on the homelands of the Poundmaker Cree Nation and the Métis Nation, we learned both about the specific regional histories and cultures of First Nations peoples in the Saskatchewan region, and also made powerful connections to the Lumbee people's experiences and those of other Native tribes in the United States.”

“The course was successful in guiding our students to understand these concepts with a depth and sensitivity that is only possible by being physically on the land, sharing with other international students and faculty, and having a direct experience with the people about whose ancestors we have been reading,” Haladay continued.

“We have returned excited to bring our knowledge back into community projects and presentations in Robeson County, and to work to encourage other students to participate in future AIS study abroad courses in the IIEC program.”