However, the foundation of his success can be traced to his days as a student at UNC Pembroke under the tutelage of long-time theatre professor Holden Hansen.

“Before taking Holden’s Acting I class, I would act on stage from my gut, but I never knew the craft of the art,” Lawson said. “Holden introduced me to what acting truly is through exemplifying character analysis, scene study and how to take care of the actor’s body.”

Lawson, along with Rakeem Lawrence, Sean Jaenicke and Mac McGill are among a growing list of Hansen’s former students-turned professional actors.

After two decades of molding young talent at UNCP, it was Hansen’s turn to take a bow after being honored with the UNC System’s 2018 Excellence in Teaching Award.

The UNC Board of Governors presents the award each year to one faculty member from each of the 17 universities. Recipients receive a $12,500 stipend and a bronze medallion.

“I am humbled and honored,” he said. “However, I expressed in my (acceptance) speech that I have a certain amount of discomfort about it because I believe that there are a lot of faculty that are as deserving or more deserving than I am.

“In spite of my discomfort, I appreciate my colleagues nominating me. There’s a part of me that feels that I may be deserving by virtue of the fact that I show up every day and do the best I can.”

“Professor Hansen is a passionate educator with a long, distinguished career of service to UNC Pembroke,” said Cummings. “His students’ success is proof that no matter where you want to land in life, you can get there from here. I commend him for being selected by his peers for this prestigious honor.”

Over the course of his career, Hansen has earned an outstanding reputation for his teaching and service to students. On most days you will find an energized Hansen in the studio theatre on the third floor of the Givens Performing Arts Center.

“We call it the black box,” he said. “We hold the acting classes in there. We have a traditional classroom, but I prefer being in a theatre. It’s a more comfortable environment for teaching.”

Preparation and ‘being in the moment,’ he says, are keys to his success. He ditched the repetitious lectures he favored early in his career.

“I believe that each individual class experience needs to be scripted in a way. You have to have a plan,” he said of his teaching philosophy. “In order to be effective with that plan I’ve discovered that I have to be myself. The more you teach something the less you have to think about the script.”

Much of developing acting skills is focused on oral communication skills, however, Hansen believes writing is equally important. All his courses are writing-enriched.

“My parents were English teachers and they are both good writers so I have worn that as a badge of honor,” he said. “Writing is important to all students of every major. If you can get a handle on writing you can really communicate things that will open doors for you.”

When he’s not teaching, he is directing. Each year he directs a student production and for the last seven summers his students have performed at Roanoke Island Festival Park in Manteo.

A professional actor himself, his students benefit from his extensive knowledge of the stage and big screen. His TV credits include Young Indiana Jones Chronicles and a Movie of the Week on ABC. He also landed roles in Arthur Newman, 42, and Bessie, and not to mention dozens of stage performances at the Burning Coal Theatre in Raleigh and the Cape Fear Regional Theatre in Fayetteville, among others.

“It demystifies it for them. By virtue of appearing in these films they know somebody who did it. I have a number of students who have gone on to get their MFA in acting and are working. It serves as a model for them.”

Acting is in Hansen’s blood. He has vivid memories of playing Santa Claus in the second grade and feeding off the laughter from his classmates when a pillow slipped from underneath his shirt.

After his high school English teacher cast him in a reading of the Trial of Socrates, he was hooked. The Nebraska native went on to study theatre in college, earning degrees from the University of Northern Iowa and the University of Texas at Austin.

A gig with the now defunct North Carolina Visiting Artist Program led Hansen to Bladen Community College in 1988. Following stints with the Arts Council in Fayetteville and Carolina Civic Center in Lumberton, he was hired as director of the Givens Performing Arts Center in 1997. He joined the faculty that same year.

“Transitioning to directing in college was no different than community theatre because the students are amateurs. They have a lot to learn. They are raw.

“But learning how to teach classes was difficult. When you have to stand in front of a group of students … I would get so nervous. I would try to script everything. I was tied to my notes. It wasn’t really teaching.

“I am better at teaching now. Not quite as bad as my first year,” he said with a laugh. “You learn what works and you make adjustments. I’m still making adjustments to the classes I’ve been teaching for 20 years.”

In 2012, he won the UNCP’s Adolph Dial Award for Scholarship and Creative Work.

After 20 years, Hansen’s love for teaching remains at an all-time high. He brings the same energy into the black box as he did his first year.

“I feel so lucky and fortunate to have had UNCP give me this opportunity and making my life meaningful. So many people live their whole lives working in jobs that they are not happy, so their existence lacks meaning.

“UNCP brings me meaning. I love that it is small. I love the diversity of students. We have students of all ethnicities, from all walks of life, from different parts of the state, country and the world. It is a blessing to be able to come in contact with such a group of students.” 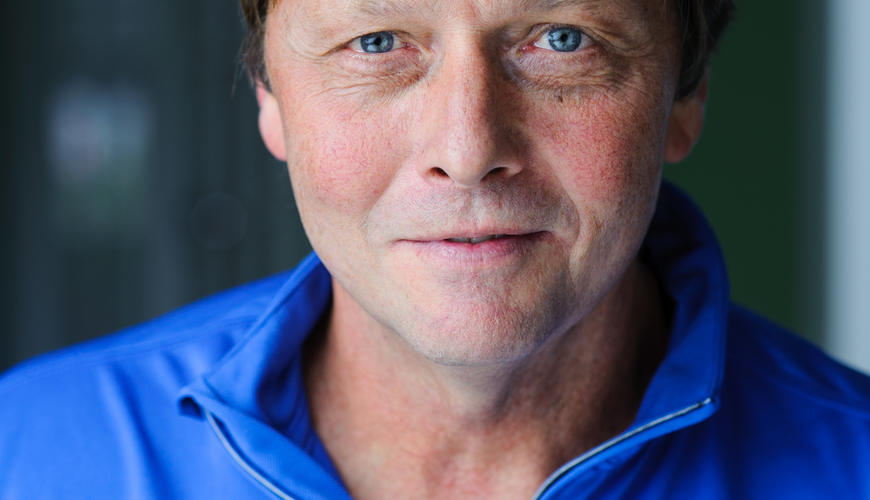