Wendee Lambert walked proudly across the stage inside the Jones Athletic Center after her name was called Saturday during UNC Pembroke’s Winter Commencement.

For Lambert, it was a 17-year journey.

She enrolled in 2007,  but was diagnosed the following year with kidney failure. Forced to withdraw from school, she refused to give up. She re-enrolled in 2015, received a kidney transplant in March, and Saturday earned a degree in business administration.

“It was an emotional roller coaster,” she said. “My professors were great. They worked with me through it all, but I had to push myself. It was tough, but I was determined to make it to this day.”

Commencement was a family affair as Lambert’s daughter, Shania Chavis, donned a matching gown and crossed the stage with a biology degree.

“This was really special for me,” Chavis said. “My mom has been through a lot. At one point she didn’t think she would graduate, but she never gave up.”

The mother and daughter pair from Rowland were among 562 graduates who earned degrees during two ceremonies on Friday and Saturday.

In her commencement address, UNC System President Margaret Spellings told the graduates that life is about compromise and relationships.

“Life is group work,” she said. “Great writers work with editors, publishers and marketing people. Great actors work with script writers and directors. Successful business owners and entrepreneurs work with hundreds or thousands of people to make their companies run.

“I hope you will recognize the raw skill you already have to shape your community, your state, your country and your world.

“Most of your life’s work isn’t about you at all,” she said. “The most meaningful and satisfying work happens when you forget yourself. When you’re focused not on your own performance or getting credit, but on the greater good.”

Chancellor Robin Gary Cummings borrowed an acronym used by Navy pilots while encouraging the Class of 2018 that their potential to carry out their mission in life is unlimited.

“C-A-V-U stands for Ceiling and Visibility Unlimited,” Cummings said. “A military term indicating perfect flying weather. No barriers, no boundaries, no limits. Today, you are that naval pilot. Perfectly positioned on the deck of that carrier.

“And as you look about, you see nothing but blue skies and open clear waters. Ceiling and Visibility Unlimited.”

On Friday, theatre professor Holden Hansen, the 2018 recipient of the UNC System’s 2018 Excellence in Teaching Award, told the 117 graduate students that they made the right decision to pursue a graduate degree in higher education.

“I fully believe that the promise of a job and career, and meaningful family life–if that is what you choose–will come to pass,” Hansen said.

Along that path, be prepared to overcome adversity and find ways to reinvent yourself, Hansen told the graduates.

In a powerful moment Saturday, Dustin Chavis perhaps received the loudest ovation when he stood from his wheelchair and, with assistance, walked across the stage to accept his psychology degree. Chavis, of Rowland, was diagnosed at birth with cerebral palsy. His plans to assist combat veterans struggling with PTSD.

In a solemn moment, the university awarded Liam Carney a degree in memoriam. Carney’s parents were presented with his theatre degree.

Saturday was twice as nice for Cierra Blackhorse of Prospect who celebrated a birthday while earning her bachelor’s degree in chemistry.

Blackhorse described the milestone as “euphoric, exciting and liberating.” Her plan is to pursue a career in pharmaceuticals.

Erin Barnhardt Allen of White Oak also earned a chemistry degree and has been accepted into the Physician Assistant program at Methodist University. She wants to specialize, one day, in pediatric medicine.

Deion Perry’s mind was filled with thoughts of his mother, Lillian, his sole source of inspiration. He was two weeks shy of his 12th birthday when his mother passed away, leaving him to be raised by his aunt in Monroe, NC.

“I do everything to honor my mother,” he said. “Even though she couldn’t see me graduate high school or college, a piece of her is in me. I know she would be proud.”

At UNCP, Perry was heavily involved with Brother 2 Brother, a mentor organization dedicated to male student success on campus. He plans to use his business degree to establish a nonprofit for underprivileged youth. 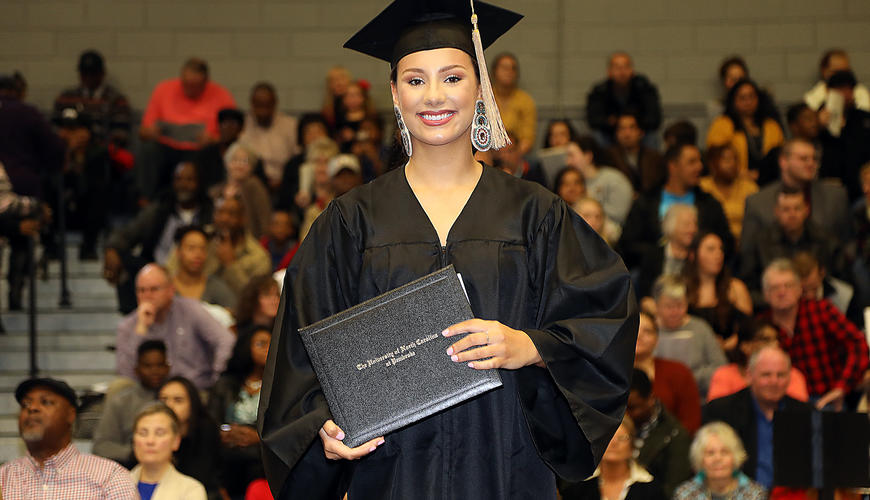