Congratulations to Jacob Alvarez.  Jacob was awarded the Undergraduate Research Fellowship-Summer by PURC. He will be conducting statistical research on factors that influence the degree of assimilation of different immigrant groups in the US. It is a well-deserved award, he is an exceptional student. 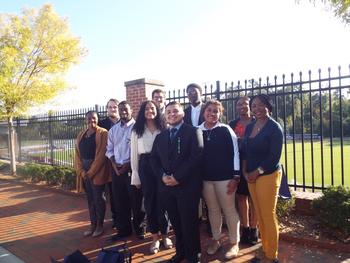 Deputy Fire Chief of Cary, North Carolina and second year MPA student Michael Martin has in collaboration with Dr. Martin Mayer had their article “The Influence of Technology on the Strategic Planning Process” recently accepted for publication in the forthcoming Encyclopedia of Knowledge, Administration, and Technologies.  This major research publication features a comprehensive collection of expert insight into key topics such as organizational structure, strategic leadership, information technology management, business analytics, among others. It is comprised of content that highlights major breakthroughs, discoveries, and authoritative research results as they pertain to all aspects of organizational growth and development. 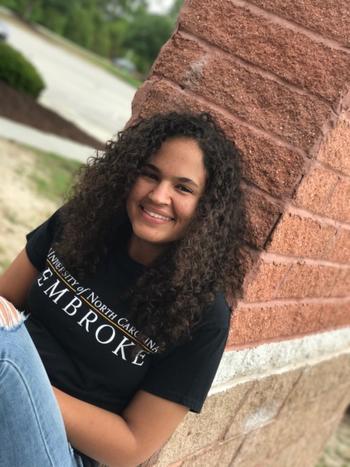 Sophomore Tasia Mears is among 20 students selected from 500 applicants for the prestigious Pre-Law Undergraduate Scholars (PLUS) Program at Duke University.

The Duke PLUS Program is an on-campus four-week program from June 2-28 for rising sophomores and juniors interested in attending law school. It is designed to prepare students to succeed in law school and help them understand the law school admission process.

“I’m expecting to learn how law school works, how to apply for it, how to get financial aid and also if this is really what I want to pursue as a career,” Mears said.

Researching the program after her adviser informed her of it, the Wilmington native said it was something she would love to be a part of.

“I thought it was a cool idea because it’s for students of color, low-income students and first-generation college students. I thought that was interesting and I wanted to connect with other students my age who are interested in law too.”

The Duke PLUS Program seeks out applicants who have proved to be strong students aspiring toward obtaining a legal education.

“I really want to be a human rights and civil rights lawyer because it’s always been something I’m really passionate about my entire life and I think doing it from a legal standpoint is something that is really important to me personally.”

Mears is a Maynor Honors College student pursuing a degree in political science.

Eight awards was tied for the highest number of awards any school received at the conference, and matched the total that UNCP’s team won in 2018.

The Braves were awarded two outstanding position paper awards, two delegation awards, and four individual awards in their representation of The Netherlands, New Zealand, South Korea, and Uruguay. Of particular note was Uruguay, who received an Outstanding Delegation award—the highest team award available at the conference. UNCP continues its run of strong showings, solidifying its position as one of the strongest teams in the southeast.

Nearly 500 students from 50 schools, representing 67 countries, were present at the conference, and they hailed from all over the southeastern United States. UNCP sent 24 students to the conference.

“I couldn’t be happier with our performance,” said faculty advisor Dr. Kevin Freeman. “The research and writing and long hours of practice prepared us well for this very competitive conference, and the team showed its true skill by performing so well.”

Model United Nations is a simulation where universities represent the interests of their selected countries and utilize writing, research, public speaking, and diplomacy to argue the policy preferences of those countries while coming to consensus on a number of timely global issues and creating living documents to reflect that consensus.

UNCP will participate at the Fall Southern Regional Model United Nations in Atlanta November 21-23 where they will represent Cuba and Belgium. UNCP alum Jordin Dickerson will serve as the Secretary-General in Atlanta, and will be responsible for running the conference. 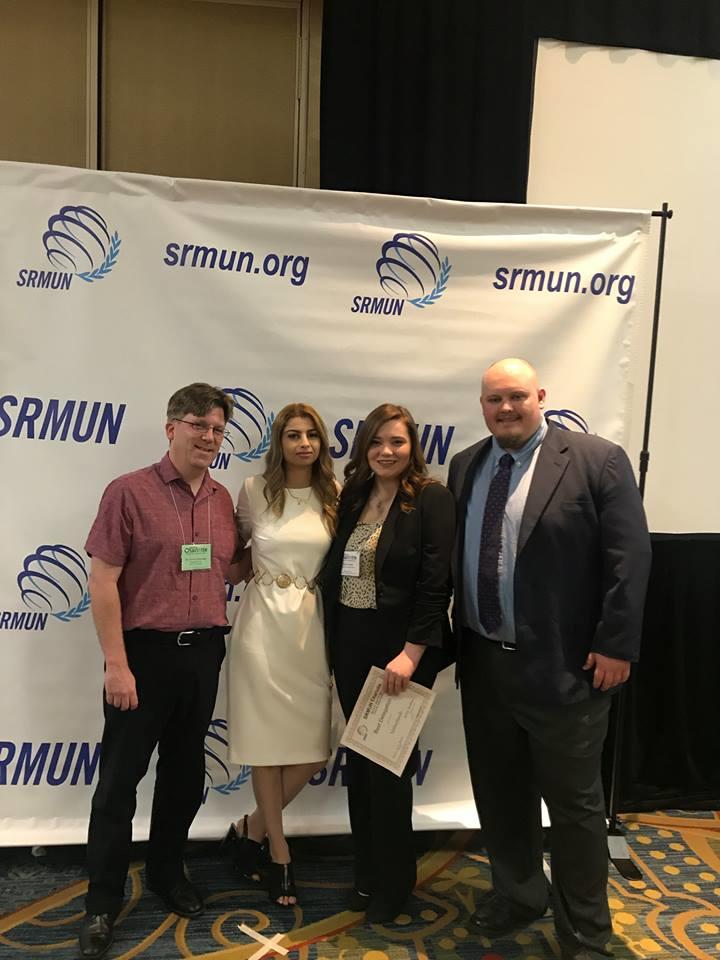 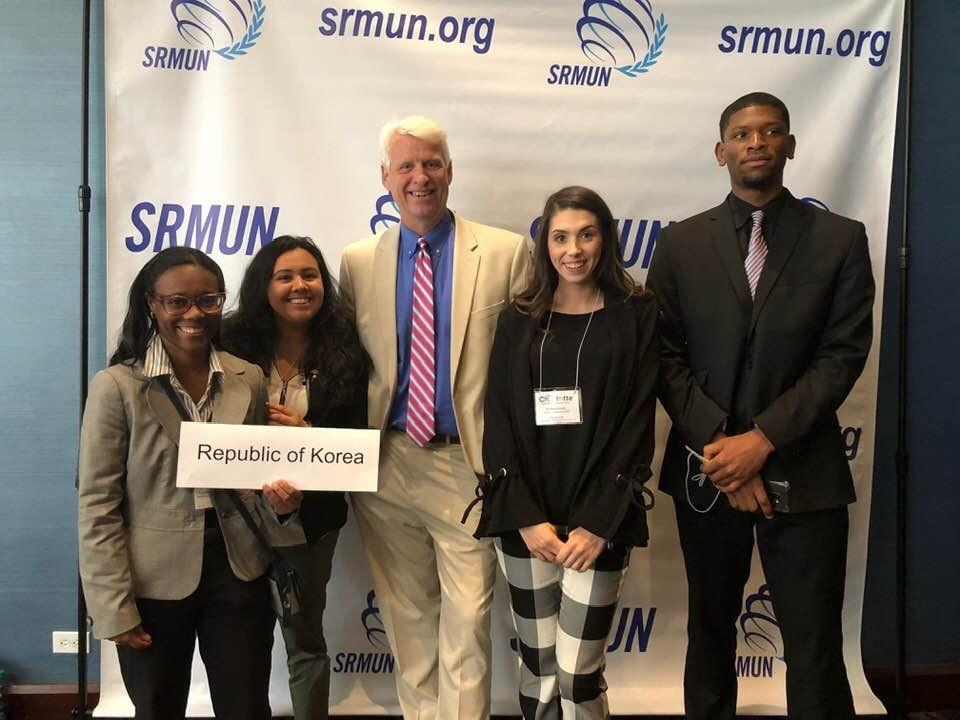 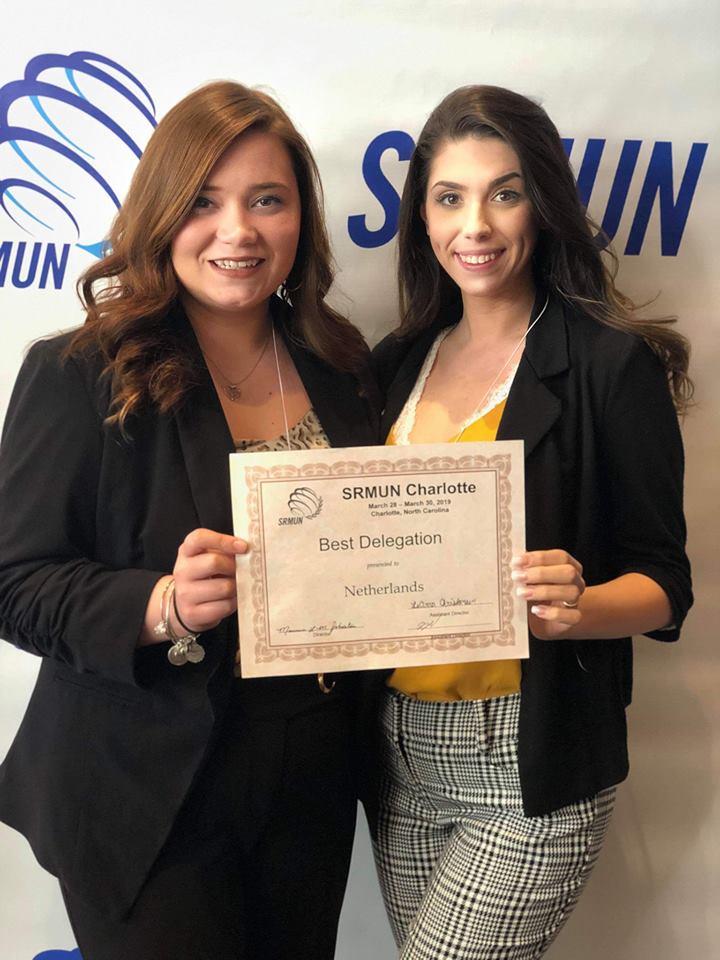 Tiffany Clark, member of the Lumbee Tribe, was awarded the Distinguished American Indian College Student Award at the 44thAnnual NC Indian Unity Conference in Raleigh, NC on March 9, 2019. She was nominated by the Lumbee Tribe of North Carolina as an outstanding college senior.

Tiffany is currently a senior, double majoring in political science and criminal justice with a concentration in pre-law at the University of North Carolina at Pembroke. After graduating with her Bachelor’s, Tiffany plans on continuing her education.

Tiffany is always engaged and stays involved as a student at UNC-Pembroke and as a member of the Lumbee Tribe. She’s also a member of the Alpha Pi Omega Sorority. She currently works at the Lumbee Tribe’s Boys and Girls Club as a Youth Coordinator. During her senior year of college, she has been interning with the Lumbee Tribal Government. She is working closely with administration on various projects, especially policy writing.

“I really appreciate the love and support my parents have always given me. They continuously encourage me to pursue my professional goals, continue with my education to be an active member of my community. Also, it is an honor to work with the strong leading women in the administrative department of the Lumbee Tribe. They have given me the opportunity to grow under their leadership and have helped me develop my professional skills. I want to thank the Chairman for believing in my future and allowing his staff to take me under their wings to shape me into a better advocate for the people of this community,” Tiffany expressed.

The Lumbee Tribe of North Carolina recognizes Tiffany’s passion for her community through her dedication, commitment and involvement.

Jingjing took part in the 1+2+1 program which allowed her to receive two master’s degrees, one from UNCP and the other from Henan University in China. She earned a master’s degree in Social Medicine and Health Care Management from Henan.

Graduate Student Dena Ali has been published in FIREFIGHTER NATION.

The UNCP Model United Nations team, pictured above, returned home after a highly successful performance at the 2016 Spring Southern Regional Model United Nations. At this conference the team represented Russia, the Dominican Republic, Bulgaria, and Ethiopia. The team received more total honors than any other school at the conference and was the only school to win multiple position paper awards. The team received a total of eleven awards, including six individual awards, three Outstanding Position Paper awards, and two team awards, including an Outstanding Delegation award for Russia, which is the highest team award given.

“In the span of two short years our Model UN team has transformed from one that had never won anything in its first six years to one of the strongest delegations in the southeast. The team has won a total of 29 awards in the four conferences participated in during school year 2015-2016,” noted faculty advisor Kevin Freeman (Political Science & Public Administration) .

The UNCP Model Arab League team participated in the Southern Regional Model Arab League (SERMAL) conference at Converse College in Spartanburg, SC, March 11-13, 2016.  Sixteen students and Professor Kirill Bumin attended. The team represented Saudi Arabia and took the roles of the heads of state and government in a simulated crisis committee, which pitted Morocco against Algeria in a territorial dispute over Western Sahara territory.  Professor Bumin notes, “Dr. Freeman and I are very proud of the wonderful work our Model United Nations and Model Arab League students are doing.” The students faced strong competition and brought home eleven awards: ten individual Distinguished Delegate awards students earned for work on their respective committees and an Outstanding Delegation award for representing Saudi Arabia overall. “This is superb! It is wonderful to see UNCP represented so well by this group of students!” Added Dr. Meredith Storms, interim Dean, College of Arts and Sciences.