The first year of college for all students should be an enjoyable experience filled with plenty of opportunities to get involved and meet new people.  The First-Year Experience also known as the Freshman-Year Experience is a program designed to help students prepare to successfully transition into and through their first year of college. FYE programs have both academic and co-curricular components.  The First Year Residential Experience program is intended to connect and engage students living in first year residence halls.  The goal of FYRE activities and events is to help enhance the freshman experience and have a positive impact on retention.

The academy has known for over a century that first-year students face unique challenges. Boston College pioneered the first Freshman Orientation class in 1888 (Gardner, 1986). Reed College (Portland, OR) became the first institution to schedule an orientation course for credit when, in 1911, they offered a course separated into men-only and women-only sections that met 2 hours per week for the year (Gardner, 1986).

Orientation classes acquired their modern form in 1972 when, after a series of campus riots then University of South Carolina President, Thomas Jones asked faculty to develop innovative ways to rethink undergraduate education. Jones' goal was to help students appreciate the university and not destroy it (Schroeder, 2003). History professor John Gardner helped develop what eventually became known as the First-Year Experience, or FYE (Schroeder, 2003). Gardner, in an interview with Schroeder (2003), defined FYE as a national and international efforts to improve the first-year, the total experience of students - and to do this intentionally and by rethinking the way the first-year was organized and executed' (p. 10).

As competition for students has increased during the last quarter of the 20th Century, institutions turned their focus on the needs of entering students in an effort to make their institutions more appealing. The popularity of programs targeting the first-year students soared. Over the years, an organized transition program has become a cornerstone of the new student experiences at campuses across the country. When Gardner (1986) found that freshmen who complete orientation courses were retained at a higher rate than those who did not take such a course, the demand for first-year services led to the establishment of a National Resource Center based at the University of South Carolina. By 1995, Gardner (2001) noted that 82% of participating institutions reported a significant focus on the first-year experience. In 2005 the 24th annual FYE conference drew over 1200 administrators, faculty and students and The National Resource Center for First-Year Experience & Students in Transition produced many publications including a monograph series and a bi-annual journal, The Journal of the First-Year Experience & Students in Transition.

Betsy O. Barefoot (2000) outlined a number of objectives needed for a successful first-year transition program. Key are student-to-student interactions and student-to-faculty interactions. Barefoot found that student time and involvement on campus outside of class must increase, and a link between the curriculum and co-curriculum areas should be established.

Guidelines for Excellence in FYE

Summarizing the research on first-year seminars, Pascarella and Terenzini (2005) concluded that first-year seminar participation “has statistically significant and substantial, positive effects on a student’s successful  transition to college and the likelihood of persistence into the second year as well as on the academic performance while in college and on a considerable array of other college experiences known to be related directly and indirectly to bachelor’s degree completion” (p. 403).

Furthermore, limited research focuses exclusively on racial and ethnic minority students’ experiences in first-year seminars. In one of the few studies examining this phenomenon, Musoba, Collazo, and Placide (2013) found that Hispanic and Black students reported that a first-year experience course helped them with their sense of social connection with the university through transition friends and learning about university opportunities.

Students’ Perceptions of the Impact and Value of First-Year Seminars at a Hispanic-Serving Institution by Jamie N. Riess

More and more, residence life and education programs are moving to a curricular approach for their educational efforts, but what is a “curriculum”? In informal discourse the term “residential curriculum” is used to describe an intentional way of promoting learning in college and university residence life and education programs. A residential curriculum, however, is a very specific approach to structuring these learning opportunities.

Residential Curriculum at UNC Pembroke...how it came about

The UNCP Housing and Residence Life team attended the ACPA Residential Curriculum Institute at Virginia Tech, Blacksburg VA, in October 2014. The team was comprised of the Director and Associate Director for the department as well as two Community Directors; one from a traditional residential community and the other from an apartment community. During the conference, the team learned of the key components needed to begin drafting a residential curriculum. After an extensive week of presentations and workshops on residential curriculum models, strategies and case studies, the team returned to campus with a skeletal framework to use in the beginning phases of drafting a curriculum that would not only fit campus culture, but would align with the educational priorities the team developed and identified during the conference as well as with the CAS (Council for the Advancement of Standards in Higher Education) standards that the department had began working on in summer 2014 in preparation for CAS review in 2016.

In anticipation of the development and implementation of a Residential Curriculum, the Residence Life Staff under the leadership and direction of the Associate Directors of Residence Life began transitioning from a traditional programming model to a curricular approach in the fall 2014. This process began with several very comprehensive brainstorming sessions designed to help reprogram mindsets as it related to programming and community development approaches. Prior to these sessions, staff was asked to read a series of journal articles on residential curriculums as well as visit the websites of a number of universities currently using residential curriculum models. These sessions focused a great deal on learning outcomes based on CAS standards and were largely successful.

In August 2014, a modified, rudimentary version of a residential curriculum was introduced in campus housing with the understanding that a full curriculum will be in the development phase for at least a year. The goal at that time was to push for a full residential curriculum roll-out in fall 2015. Community Directors were responsible for overseeing the development of programs along with Resident Advisors. The process included the development and writing of learning outcomes based on the CAS model using Bloom’s Taxonomy verbs for each program and identified an: audience, behavior, condition and degree for each outcome. Additionally, each program had to meet one or more of the following: UNCP Strategic Plan, Student Affairs Mission, and Housing & Residence Life Missions and/or CAS Outcome domains. This modified version proved highly successful, and the following academic year saw the full implementation of the Residential Curriculum within campus housing.

What is the goal of the Residential Curriculum at UNCP?

This experience encourages students to be BRAVE: Boldly pursue opportunities that promote academic progress; Respect for self and others; Acquire skills that build career readiness; View every experience as a learning opportunity; and Endeavor to develop greater critical thinking and problem solving abilities.

How will the residential curriculum be implemented in my community?

The following strategies will be utilized in implementing the residential curriculum.

There are five signature components of the FYRE program designed to help students successfully transition to UNCP and become an active community member:

1. Live with other First-Year Students

Our FYRE program provides the opportunity for incoming first-year students to live with one another as a cohort and create new and lasting friendships. This is an awesome way to begin their UNCP experience here on campus. First-year students will have the opportunity to meet many of their classmates and develop lasting friendships, attend interesting and engaging activities, and engage in important discussions about life on campus by being apart of the first year experience.  Overall, students living in the First-Year Residential Experience will have high levels of satisfaction with their residence hall experience.

2. Structured Points of Contact with their RA (Brave Talks)

We guarantee that each student will have at least two structured points of contact with their RA during a semester. While students and RAs will be in contact throughout the academic year, these meetings are opportunities to focus more specifically on transitional issues, access to academic resources, and opportunities within the community. Students have the opportunity to share their UNCP experience, ask questions, and hear about important campus resources like the Writing Center, Tutoring Services, Academic Advising Center, Career Services, Counseling and Psychological Services, and more.

Within the FYRE community, students will get to experience a low Resident Advisor (RA) to student ratio so they have access to, and attention from their RA year-round. This means that UNCP’s first-year students have more personalized attention, guidance, and mentorship from a  highly-selective and highly-trained group of upper-class student leaders.

Our FYRE program consists of an impressive group of UNCP faculty and staff who serve as educational mentors for  first-year students who are transitioning to UNCP. FYRE Mentors will be partnered with a residential community where they will participate in engaging events, engage students in interesting dialogue, and inspire curiosity in new topics.

FYRE offers increased opportunities for students to have a voice and involvement in shaping their community experience through engaging events with RAs, residential hall councils and RHA (a Social Programming & Community Advocacy Student Group). FYRE focuses on students as partners in creating and shaping their first-year experience. While RAs and FRYE Mentors will still provide leadership, mentorship, and resources to first-year students, first-year students will be invited to participate in their community by sharing ideas, interests, and helping advise community activities.

Through FYRE opportunities for engagement, students will be able to: 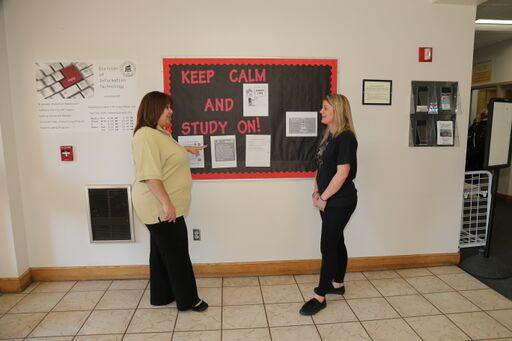 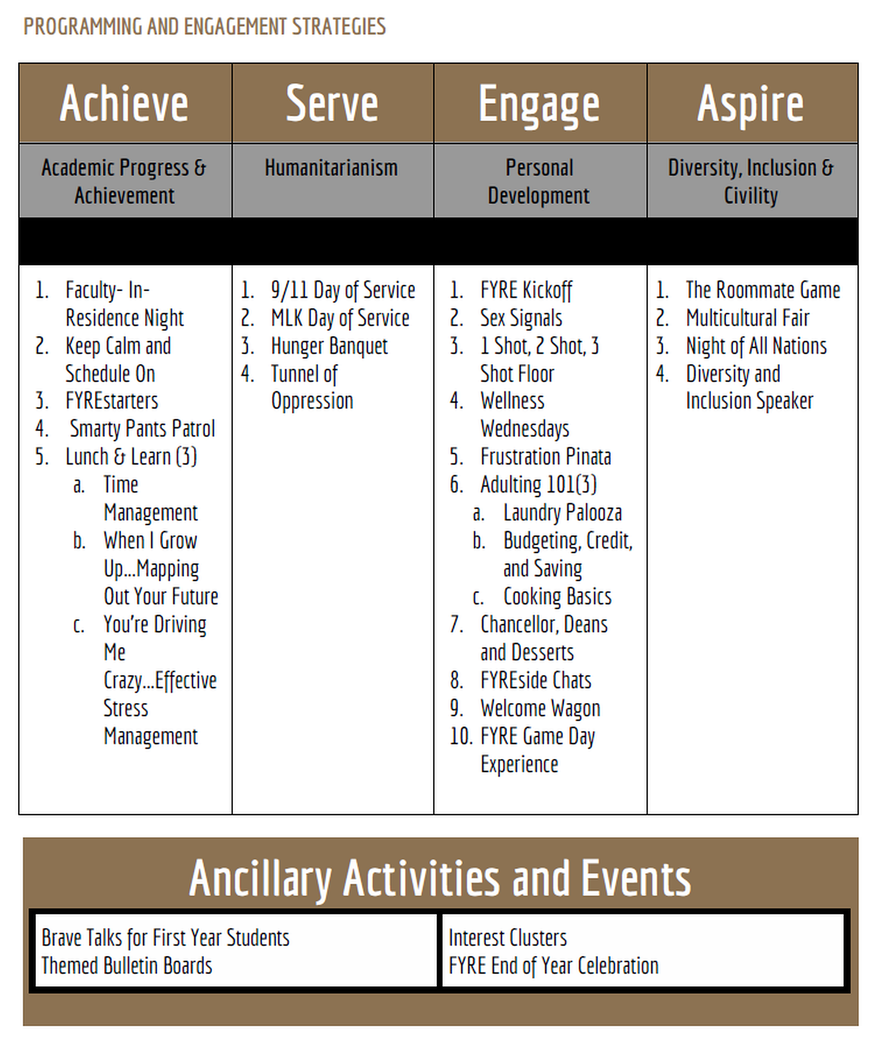 The First Year Residential Experience cluster is an integral part of the overall first-year experience at UNC Pembroke. The FYRE cluster will provide relevant, experiential programming and services to encourage student development and academic success. By participating in 15 out of the 20 co-curricular events, residents will utilize Brave Connect to develop a co-curricular transcript and receive points to ideally secure priority status for the housing selection for the subsequent academic year. Furthermore, the program will track resident participation and engagement with all first-year programs and support services. At the conclusion of FYRE, the FYRE Committee will conduct program assessment to evaluate the effectiveness of the residential program, staff services, and future recommendations to make the program more intentional in its efforts to help acclimate students to the university environment.

In order to effectively track event retention and student participation, the FYRE Committee will:

The program will be assessed at a minimum semi-annually (Fall/Spring).  Planned assessments include but are not limited to the following:

Questions for survey tools will be based and data, information and recommendations from the National Resource Center for the First Year Experience and will be built and distributed using Qualtrics.