With the aging of an estimated 450 million baby boomers worldwide (born 1946-1964), Alzheimer’s disease is an impending epidemic with the critical need of preventative approaches. Alzheimer-type pathogenesis is due to suspected imbalances between protein production and protein clearance, and Professor Bahr has identified a lysosomal regulation pathway that can be manipulated to prevent age-related deficits in proteolytic clearance linked to dementia. Professor Bahr received his Ph.D. in chemistry from University of California-Santa Barbara. After being a faculty member at the University of Connecticut for nearly 12 years, he was appointed as the William C. Friday Chair and Distinguished Professor in 2009 at the Pembroke campus of the University of North Carolina – the oldest public university in the nation. Professor Bahr has presented his research in 16 countries, has more than 150 publications, and has patents associated with first-in-class drugs for neurodegenerative diseases. He is a member of UNCP’s Biotechnology Center and the European Task Force on Brain and Lysosomal Storage Diseases, and he received the 2021 and 2012 Outstanding Mentor Award from the Council on Undergraduate Research, which represents over 900 campuses. In 2013, Professor Bahr was named as the first recipient of the Governor James E. Holshouser, Jr. Award for Excellence in Public Service by the UNC Board of Governors.  In 2017, he received the UNC System's highest honor, the Oliver Max Gardner Award, which is bestowed upon faculty who have “made the greatest contribution to the welfare of the human race.”

Thanks to the Bahr Lab, UNC Pembroke is awarded landmark patent for compounds to treat Alzheimer's disease and traumatic brain injuries. Click here to read the full story.

Step 1: for the Area to Apply Gift, please scroll and select "Other"

or Donate by mail: 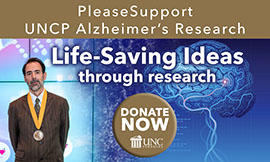